School. Apparently the ‘best years of your life’.

That definitely was not my experience of school, it has to be said.

One of the big frustrations I remember from my time at Kirkintilloch High was taking Computing – both at the Standard Grade level (third and fourth year, or aged 14-16 roughly), and Higher (aged 16-17).

Despite it being something that I had a pretty in-depth understanding of, I ultimately only got a B for the Higher exam. What I remember is that the questions were vague, allowing significant room for interpretation; the teachers lacked the knowledge or the common sense to make allowances, and you could be marked down for answers which were correct, but didn’t match up rigidly with what was on the marking scheme.

The example that sticks in my head was from a prelim exam we sat where the question was ‘Name three pieces of hardware required to watch a multimedia video’. I answered: ‘Processor, Monitor, Graphics card’, which seemed to me like the very basics of what you would need – discounting all the other bits and bobs that make up a functioning computer. Apparently, this was wrong. The correct answer was something akin to: “An input device, processor, video card, or graphics card.’ My teacher informed me that ‘monitor’ was not on the marking scheme, and therefore I lost points as a result. My desperate pleading for an explanation of how anybody could watch a video without a display fell on deaf ears, and the maddening insanity of this has forever stuck in my mind.

I decided to go back and have a look at some of the questions from around that period, to see what they were like with the benefit of hindsight. This proved to be a bit tougher than I had expected, as past papers from that era aren’t kept online by the SQA. I e-mailed them to request a copy, and received a rather puzzling response:

Well, that’s weird. Surely the SQA own the copyright to their own past papers? I pressed them on this, and got – if anything – an even more puzzling reply:

The SQA can’t keep past papers for more than 5 years due to ‘data storage’?! I almost wrote back to offer a donation of a hard drive. Hell, even a 1GB USB pen drive should have been enough to keep them ticking over for a few decades. It possibly goes some way to explaining the nonsensical Computing questions that they used to ask.

I searched high and low for PDFs from the relevant years, only to turn up a couple of prelim samples from schools that had seemingly uploaded them yonks ago and forgot. Finally, success! I tracked down this bad boy from a seller on Amazon: 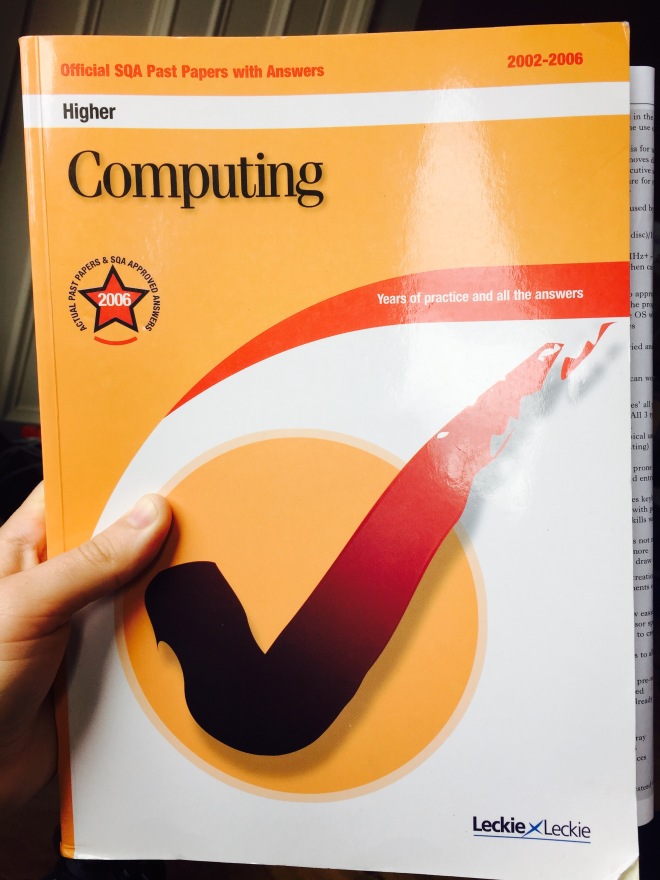 So let’s have a look shall we? The examples below are taken from a mix of the online PDFs that I found, and the book above.

Consider the following question, taken from the specimen question paper to be used from ‘2005 onwards’:

The purpose of this question is to discuss ‘peripherals’, and the ‘advantages of solid state storage devices’. These are pretty important to understand, though the question here seems a bit bizarre.

This is backed up by the answers given:

It’s worth noting that these two are the only two listed in the marking scheme. Personally, I think there should be far more. Here’s a couple of suggestions:

Thankfully, things have improved a bit on this front. Here’s the question from the same subject, but in 2014:

Going back to the 2005 specimen paper, here is question b) – along with the answers:

In some respects, the aim of this is pretty good. Students should definitely understand the different types of file formats available for graphics, and their varying purposes. However, the question itself is stupid. It asks what file format would be ‘suitable for this application’ – i.e. for use in a digital camera, and then gives equal marks for explaining the pros and cons of whatever you choose. That means you’d get the same marks for answering GIF as you would JPEG. Completely ridiculous. A GIF would never be an appropriate file format for use in a digital camera, irrespective of the advantages and disadvantages. There’s too much of a disconnect between the question and the learning outcome.

This would be a more appropriate question:

‘Name a ‘standard file format’ used in modern digital cameras, and explain why it is most appropriate (one advantage and one disadvantage)

It makes clear that there are particular formats that are used, doesn’t award marks for inappropriate answers to real-world examples, and still requires the student to understand and analyse why the format is appropriate over and against others.

Here’s a similar question from the 2005 exam, with the acceptable answers underneath.

Moving on, take a look at this question:

I’d tell Helen to throw out her PCWorld Magazine and go buy a Macbook Pro.

Okay, I’m kidding, but only half.

This is the answer given:

The purpose here is to demonstrate ‘justification of the hardware selected in terms of appropriate characteristics’. Again, an important aim, but with an inappropriate question.

We’ll ignore the fact that floppy drives at this point were only ever used in PCs for when (inevitably) things went tits up and you had to do something to the BIOS (Apple had gotten rid of them years before this). We’ll also ignore that the question didn’t actually specify what sort of data Helen wants to back up, so it would be impossible to know whether a floppy drive was too small for purpose or not. (Maybe she just wanted to back up a few text files?).

Even back then, the most appropriate answer would be to use some sort of external USB storage. Helen would have been better off getting the cheaper system out of the two that let her also get an external device. Maybe that’s what’s meant to be covered under the vague description of: ‘Other suitable.’ However, it looks like they don’t really care what answer you give, so long as you pick the one with the DVD-ROM.

This sums up exactly what was wrong with much of the Computing Higher back then. Even if you gave a perfectly justifiable reason to pick the ‘Lynx 983’ device, you would be marked wrong – completely defeating the aim of the student justifying the hardware selected based. The questions were vague, allowed significant room for interpretation, and no common sense was used in the marking process. On top of that, the teachers often didn’t have the knowledge or leeway to do anything about it anyway.

One of the saving grace’s of the curriculum is that it included questions relating to ‘Computers and the Law’. Something that everybody should have an understanding of:

Another of the problems with the Computing course was the disparity in difficulty levels of the questions within the space of one paper. On one hand, students are asked to explain what the benefit of using a DVD is over a CD (answer: more space), or to explain why a short domain name is better than a long, complex one… and how the Internet can help small businesses:

and just a few pages later they are expected to know wtf ‘backchaining’ and ‘loop constructs’ are, and to be able to express things in pseudocode:

and does anybody really need to know how to work out numbers in binary? I sure am glad I don’t have to do that sort of calculation any longer.

I get the importance of gaining holistic knowledge about computing and the technology industry, but the consistency in the questions was way off. One of the particular frustrations I remember from sitting these exams myself was being treated like an idiot on one hand: “Duhhrr give an example of a URL.” and then being expected to produce fairly beefy examples of scripts out of our heads on paper (that’s right, we ‘coded’ everything in our notebooks, rather than using the computers). It seems like half the course should have been at Standard Grade, rather than Higher level. Although it’s probably best we don’t go back to look at those particular questions, which involved explaining what a mouse and keyboard were used for.

Back then the Computing curriculum was a joke, doing a disservice both to those who taught it as well as those who sat it. The purpose of the whole thing seemed (and seems) pretty unclear. Whether it was to teach the basics of hardware, prepare future programmers for University, or just give a general overview of Computing it failed on all accounts. I really hope that things have changed since then.