The latest controversy to hit Scottish politics is a video showing some SNP councillors in Renfrewshire burning a copy of the Smith Commission report. Yup, it seems ridiculous even typing out the words.

Acting like some sort of idiotic school children, the councillors in question fumbled around outside of Renfrewshire House building to burn a copy of the report, declaring:

This is what we think about it. No real powers for Scotland again from Westminster. […] There you go Gordon Brown, cheers.

Before signing off with ‘Happy St. Andrews Day’.

The video was on Youtube, which the BBC have now grabbed and put on their site here, should you want to watch it. Personally, I wouldn’t bother. It’s embarrassing for anybody frankly, irrespective of what political affiliations they might have. To be honest, it shouldn’t come of all that much of a shock that councillors are acting like complete muppets; I thought that was par for the course in local government.

The reaction from both sides to this scandal has been revulsive.

Jim Murphy, ever desperate to be seen as a master orator decried the stunt on Twitter:

I’m not really sure what video he watched, since the twits couldn’t even light the bloody thing properly, so to say that it was torched is a bit of a leap. None the less, this response is patronising bullshit from a man who has divided his own party, and stood on a crate on streets around Scotland literally shouting in the face of people who disagreed with him. Platitudes like ‘Surely it’s time for Scotland to unite.’ simply betray the lack of concern or understanding for the actual political landscape in Scotland. The actions of a few morons do not equate to the position of the SNP, and it’s both boring and disingenuous to bring them together in such a way. They were suspended, for what it’s worth.

Leaving aside the use of the ridiculous term ‘The Vow’, which sounds as if it is the name of some daytime reality TV show, there’s no question that she’s right on one thing: the whole burning situation was both idiotic, and embarrassing.

What I find equally embarrassing though, is the idea that somehow the commitment set up by Gordon Brown was ‘promised, voted for and delivered’. What was promised is nowhere near what has been proposed in the Smith Commission (more detailed reading of what’s included is here), and then there’s that key word… proposed. The recommendations in the report will not be ‘delivered’ unless the UK Parliament votes to accept them, and it’s been made clear that that won’t happen until after the next General Election, if it happens at all.

The idea that everything is now fine and that politicians kept their promises and we should get back in our box and stop complaining is not just ludicrous, but insulting. Even if you think that the Smith Commission has been fantastic, and that control over road signs is the apex of devolution, it’s unthinkable that you would consider it to be ‘delivered’ until it’s signed into law.

I responded to the retweet of the above from aspiring Labour party candidate and solicitor Cat Headley to query the above. Instead of a reasoned, articulated response that one might expect, instead she chose to attack me directly – saying that I knew nothing about politics.

It boggles the mind that politicians are so blindsided by tribalism that they will dismiss people who question their statements, or query their position as nothing more than diddies that don’t know what the grown-ups are talking about anyway. Such staggering arrogance is precisely why people are fed up with the entitled attitude towards issues taken by those in political parties. The sooner this contemptuous notion is stamped out, the better.

Of course, stupid begets stupid. In response to the Jim Murphy’s comments, and the ludicrous idea that ‘The Vow’ has been delivered (‘something near to federalism’, remember?), elements of the other side have gone on the offensive. 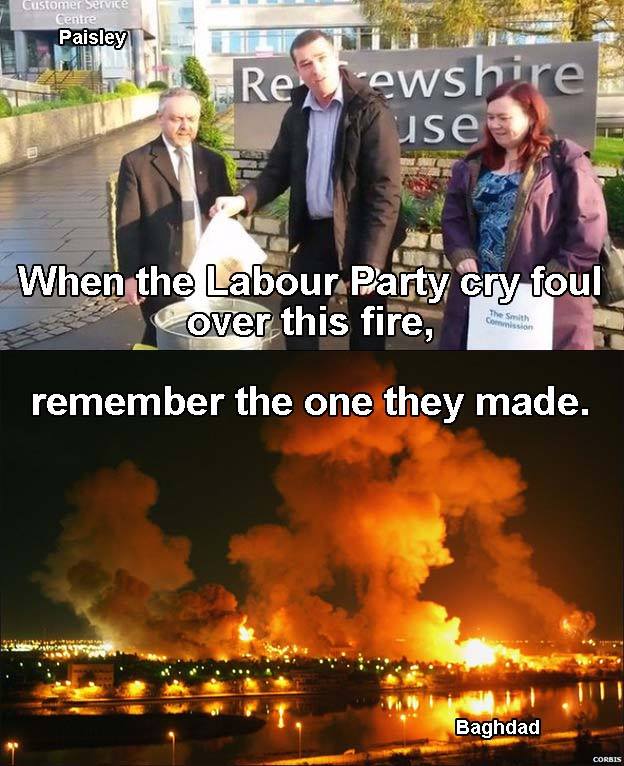 This is in reference to the Labour Party’s decision to lead the UK into war in Iraq under dubious (and illegal) circumstances – specifically in relation to Jim Murphy’s support.

There’s been a lot of this floating about, and it’s quite simply a dumb response. One does not dismiss a stupid decision made by one group by upping the ante and equating it literally to another tragic political decision in this manner. It’s petty, lazy, and smacks of die hard factionalism. Frankly, if anything is offensive, it isn’t the burning of the Smith Commission report in the bin, it’s the comparison between Jim Murphy’s idiotic words and a war which has resulted in the loss of an inestimable amount of lives.

The words of Jenny Marra are correct: This incident, and the approach from all sides has been an embarrassment to the Scottish people. Not because of real debates that are being had, but because of the blatant spin, arrogance, and political opportunism demonstrated by all sides in response.